Recently my friend Joël Franusic was stressing out about sending postcards to his Kickstarter backers and asked me to help him out. He pointed me to the excellent service Lob.com, which is a very developer-friendly API around printing and mailing. We quickly had some code up and running that could take a CSV export of Kickstarter campaign backers, verify addresses, and trigger the sending of customizable, actual physical postcards to the backers. 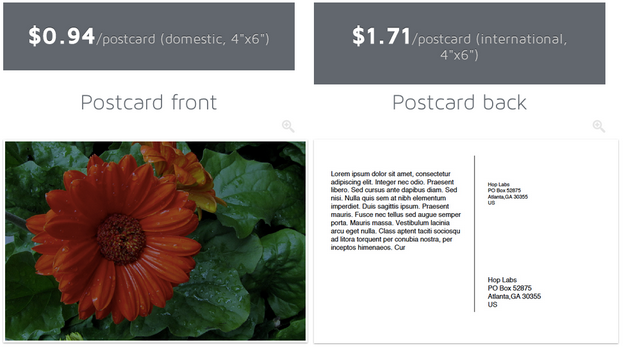 We wanted to share the project such that it could help out other Kickstarter campaigns, so we put it on Github: https://github.com/mrooney/kickstarter-lob.

Below I explain how to install and use this script to use Lob to send postcards to your Kickstarter backers. The section after that explains how the script works in detail.

Using the script to mail postcards to your backers

First, you’ll need to sign up for a free account at Lob.com, then grab your “Test API Key” from the “Account Details” section of your account page. At this point you can use your sandbox API key to test away free of charge and view images of any resulting postcards. Once you are happy with everything, you can plug in credit card details and start using your “Live” API key. Second, you’ll need an export from Kickstarter for the backers you wish to send postcards to.

Now you’ll want to grab the kickstarter-lob code and get it set.

These instructions assume that you’re using a POSIX compatible operating system like Mac OS X or Linux. If you’re using Mac OS X, open the “Terminal” program and type the commands below into it to get started:

At this point, you should have a text editor open with the configuration information. Plug in the correct details, making sure to maintain quotes around the values. You’ll need to provide a few things besides an API key:

Now you are ready to give it a whirl. Run it like so. Make sure you include the filename for your Kickstarter export:

Before anything actually happens, you’ll notice that you’re informed of how many addresses have not yet received postcards and prompted to send them or not, so you can feel assured it is sending only as many postcards as you expect.

If you were to run it again immediately, you’d see something like this:

After previewing your sandbox postcards on Lob’s website, you can plug in your live API key in the config.json file and send real postcards at reasonable rates.

How the script works

This section explains how the script actually works. If all you wanted to do is send postcards to your Kickstarter backers, then you can stop reading now. Otherwise, read on!

Before you get started, take a quick look at the “kslob.py” file on GitHub: https://github.com/mrooney/kickstarter-lob/blob/master/kslob.py

We start by importing four Python libraries: “csv”, “json”, “lob”, and “sys”. Of those four libraries, “lob” is the only one that isn’t part of Python’s standard library. The “lob” library is installed by using the “pip install -r requirements.txt” command I suggest using above. You can also install “lob-python” using pip or easy_install.

“ParseKickstarterAddresses” is the code that reads in the backer report from Kickstarter and turns it into an array of Python dictionaries.

The “addr_identifier” function takes an address and turns it into a unique identifier, allowing us to avoid sending duplicate postcards to backers.

The “kickstarter_dict_to_lob_dict” function takes a Python dictionary and turns it into a dictionary we can give to Lob as an argument.

The “main” function is where the majority of the logic for our script resides. Let’s cover that in more detail.

Next we query Lob for the list of postcards that have already been sent. You’ll notice that the “processed_addrs” variable is a Python “set”, if you haven’t used a set in Python before, a set is sort of like an array that doesn’t allow duplicates. We only fetch 100 results from Lob at a time, and use a “while” loop to make sure that we get all of the results.

One we fetch all of the postcards, we print out how many were found:

Then we iterate through all of our results and add them to the “processed_addrs” set. Note the use of the “addr_identifier” function, which turns each address dictionary into a string that uniquely identifies that address.

Next we set up a bunch of variables that will be used later on, variables with configuration information for the postcards that Lob will send, the addresses from the Kickstarter backers export file, and variables to keep track of who we’ve sent postcards to and who we still need to send postcards to.

At this point, we’re ready to start validating addresses, the code below loops over every line in the Kickstarter backers export file and uses Lob to see if the address is valid.

Finally, if we do need to send one or more postcards, we tell the user how many postcards will be mailed and then ask them to confirm that those postcards should be mailed:

If the user enters “Y” or “y”, then we start sending postcards. The call to Lob is wrapped in a “try/except” block. We handle calls to the Lob library that return a “LobError” exception, counting those calls as a “failure”. Other exceptions are not handled and will result in the script exciting with that exception.

Lastly, we print a message indicating how many messages were sent and how many failures we had.

(If the user pressed a key other than “Y” or “y”, this is the message that they’ll see)

And there you have it, a short script that uses Lob to send postcards to your Kickstarter backers, with code to only send one postcard per address, that gracefully handles errors from Lob.

I hope that you’ve found this useful! Please let us know of any issues you encounter on Github, or send pull requests adding exciting new features. Most importantly, enjoy easily bringing smiles to your backers!