I’ve been carefully tracking my personal finances for the past 8 years or so (using my own software, wxBanker), and thought it would be a fun exercise to analyze the graph of my savings or “net worth” over this entire period. Each period was surprisingly different! 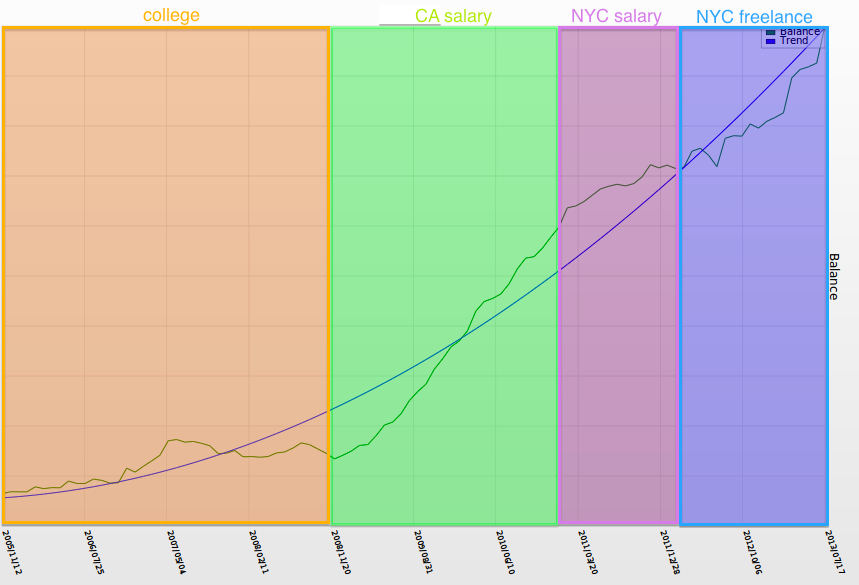 The green line is my actual total savings, while the blue line is just a 2nd degree best-fit line that you can ignore. Take a look at how the slope noticeably changes for each period! Let’s look at each of the segments.

This was a very frugal part of my life. I was very fortunate not to have much tuition obligation due to financial aid, a large academic scholarship, and a generous family. So what you see here is me scraping savings together, not always outpacing the cost of rent, books, and food. The two humps were paid internships which RIT called “co-ops”.

2: My first job and the Bay Area

After college I took an offer at a startup in California (Genius.com). The graph here is oddly linear, despite a couple raises. Perhaps I just spent the extra money on more frozen yogurt. After 2 years at this job, I along with the majority of the engineering team was laid off. The change was welcome, and I used the severance to interview full-time. I found a much smaller “pre-A” start-up, Canvas Networks, and took the job, which required a move to NYC.

3: Canv.as and the Big Apple

The growth of savings here makes a steep change for the worse. Taking a decent pay cut (the understandable cost of working at 4 person company where I could get >1% equity), plus moving to the most expensive city in the country are the main causes. There’s a lot more volatility as well, likely from things such as broker’s fees and having to pay overlapping rent on two apartments for a month while I moved.

While I did end up getting raises that eventually brought me well beyond my previous salary at Genius, they were put entirely towards moving out of a windowless sublet into my own nice, sunny apartment. After a year at Canv.as I decided the full-time life wasn’t for me, and quit to become a part-time freelancer.

Here is where things get really interesting: I went from working about 50 hours a week to working no more than 10 hours per week, and I started saving more. After I started freelancing and had the choice to work as much or little as I wanted, I decided I’d prefer to work the “lowest responsible amount”. In other words, figure out my full budget including rent, food, health care, still saving money, etc, and just work enough to earn that much (after taxes). Freelancing 10 hours a week ended up being a 40% pay cut, but it was a great trade for an 80%+ hours cut.

But why am I saving more now? First, my expenses were dramatically reduced because my girlfriend and I moved in together, halving my rent and utilities. This alone is about $1,200/mo, $14,400/year, which used to require an extra $20K in earnings to support after losing a third of it to taxes. Having enough time to cook, which I love, also saved me from buying breakfast and dinner multiple times a week. This was easily costing me an extra $100/week, ~5K/year, again requiring about $7.5K in salary to support due to taxes.

Doing business as an S Corporation also meant a lot of my normal expenses became tax-deductible (a home office deduction was huge), and my effective tax rate itself was also lowered due to being able to (perfectly legally) take much of my profits from the company as a distribution instead of personal pay, avoiding some taxes on that portion of income.

For me, working part-time also meant less burn-out, meaning fewer expenses related to entertainment, drinks, and vacations required to “decompress”, etc. Finally, since about 80% of my money is in stocks / mutual funds, the recent market rally also helped a lot.

UPDATE: By popular request (of one person) here is the same graph that does not include gains or losses in the market. It is fairly similar except that the bumps and dips are larger as the total amount is less, and the freelance slope is not as significant, but luckily still noticeably better. I chose a linear trend curve here to make that a little easier to tell: 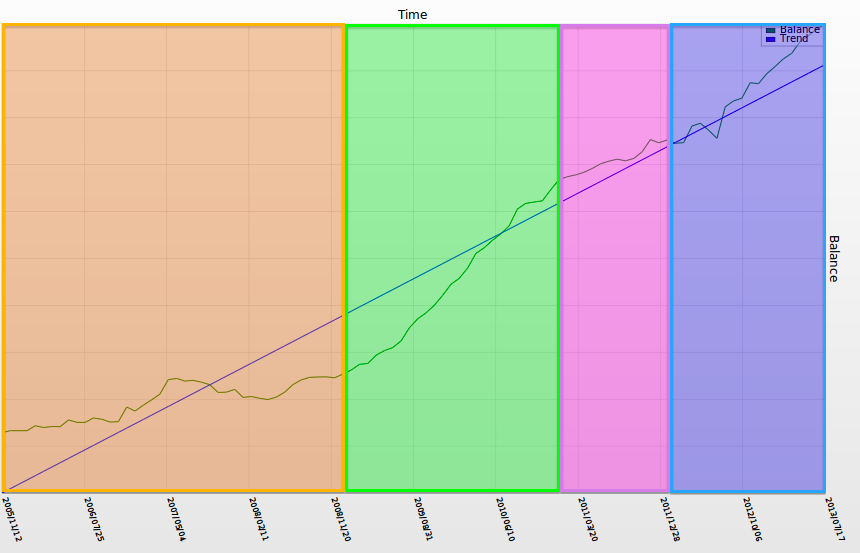 For what is worth, bank interest currently accounts for 2% of my total savings, and capital gains/losses for 18%.

Wow, you read it all, maybe! Do you do any kind of analytics, budgeting, or financial retrospectives, or am I the only one?